Jim was introduced to how I do Birthdays. He had three the first one was given by his oldest daughter Melissa. It was the Friday before his birthday this was because Jimmy couldn't come to the surprise party on his birthday. So that was the first one and of course he got presents there. He had also received cards in the mail and I wouldn't let him open them until his actual birthday. So then on his birthday I told him I wanted to take him out for his birthday so we went to his favorite Japaniese restruarant. After we were seated his kids and most of the grandkids came walking in. He was so surprised. That was great. He got presents there also and he loved it. Then on the following Sat. we had a party out at the house. We had about 25 people here it was so much fun. We cooked hamburgars and hotdogs. Had salads and chips. All who came had a great time. And he got even more presents what a spoiled man. I think Jim enjoyed all of the attention. The Saturday before Mother's Day we met Jim's brother George (84 years old) and his wife Jeanne at the nursing home where Jim's mother is. Who by the way is 101 and still as bright as ever. George is a snowbird and had just come back from Florida. It was great to meet him because I have talked to him on the phone several times. When we were leaving Jim's mom didn't want us to go so we told her we would be back on Mother's Day to bring her some Dandylions.(acutually they are weeds but the northerns eat them like spinach) She likes them cooked with vinegar, garlic and butter. She was excited for that. Here is a picture of Jim and his Mom on Mother's Day. We had such a great visit with her. She wasn't really sure who I was since this was the first time that I had met her. She was very alert and happy to have us there. We spent most of Mother's Day with her. I thought this was a great way to spend the day because you never know how long she is going to be with us. She asked me who I was and then turned to Jim and said why didn't you tell me that you were going to get married. Jim said that he just didn't get around to it. I thought that was so funny. Here is me opening my Mother's Day gift from Julie. I had a great Mother's Day it was nice to be with Jim and his mom.
I really missed all of you and the grandkids.
Posted by Nana and Papa at 7:22 PM 2 comments: 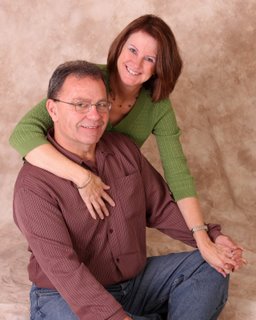